The Environmental Protection Agency (EPA) of Ireland has responsibility for implementation of the national lakes monitoring programme. At the EU level the EU Water Framework Directive (WFD) requires the monitoring of lake waterbodies for ecological status. The EPA is looking into the use of satellite Earth observation data to contribute to the Irish national lakes monitoring programme and EU Water Framework Directive with two key goals:

While the monitoring programme in Ireland covers 225 of the largest and most important lakes there are more than 12,000 lakes and ponds in the country. Latest research has indicated that smaller waterbodies are more isolated from pollution sources and harbour a substantial proportion of freshwater biodiversity across landscapes.  With the improved spatial resolution of the new generation of Earth observation satellites (like the Copernicus Sentinel-2 satellites) also the smaller water bodies can now be captured.

Finding a way to use satellite Earth observation data to estimate ecological status would give a more holistic assessment of water quality at both catchment and national level. It can guide teams on the ground to where pollution needs to be addressed or biodiversity needs to be conserved.

Some of the challenges in achieving this include getting enough cloud-free images, atmospheric correction and using the low signal returned from lakes. Earth observation data offers valuable information, but before extracting the right data concerning assessing lake ecology a substantial degree of expertise in image processing is required. Especially with respect to atmospheric correction.

EPA has collaborated with VITO Remote Sensing for the processing of Sentinel-2 images for all the Irish lakes designated as Water Framework Directive water bodies.  We have now obtained data for over 800 lakes over a three-year period (2016-2018).
For the atmospheric correction of the data we used the iCOR-based processing chain to derive Sentinel-2 water quality products. iCOR can be used to process a variety of airborne and satellite images of coastal waters, transitional waters, inland waters and land surfaces.

Analysis is still proceeding but initial results look promising when tested on the Glyde-Proules catchment. This area contains 44 lakes/ponds, of which only three are monitored by traditional methods using boats to collect samples for analysis. The model was applied to the Sentinel-2 water products and predictions of status were obtained for 16 lakes (>1 ha).

The remainder were either too small, dry or shallow. Comparing results of the Sentinel-2 based ecological status with that estimated by field monitoring found the results were within one ecological class for the test catchment (see image). 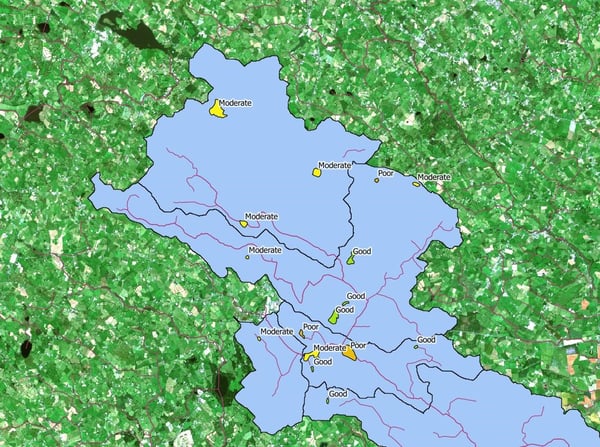 Ecological status predicted from Sentinel-2 for the Glyde-Proules catchment

The Irish EPA is currently sponsoring further research on this through the INFER project as well as keenly following many of the large European research projects. Earth observation has been identified as having a big role to play in how Europe manages its water quality through future revisions of the Water Framework Directive. We aim to incorporate the results into the national portal for data on the WFD next year https://www.catchments.ie/.