Towards a global biodiversity monitoring system

It is in this context that the European Space Agency (ESA) initiated the GlobDiversity project, which started in June 2017. GlobDiversity was the first large-scale project explicitly designed to develop and engineer remote sensing-based variables relevant for biodiversity monitoring, referred to as Remotely Sensed enabled Essential Biodiversity Variables (RS-enabled EBVs) in the project.

At the end of the project in September 2020, the GlobDiversity consortium, a unique team of biodiversity experts led by the University of Zurich, presented how they developed, validated and showcased a number of High Resolution remote sensing-enabled EBVs on the structure and function of terrestrial ecosystem.

To build a global knowledge of biological diversity of terrestrial ecosystems (= on land) and of relevance for society, the GlobDiversity consortium engineered retrieval algorithms for three remote sensing-based variables relevant for biodiversity monitoring:

These three algorithms are based on high-resolution satellite data from Sentinel-2 (10m resolution), Landsat-8 (30m resolution) and in case of fragmentation on available land cover maps such as Copernicus Global Land Service Land Cover maps generated by VITO Remote Sensing. The final algorithms were selected based on a trade-off analysis to find the most suitable algorithm towards a global application for biodiversity monitoring.

As one of the GlobDiversity partners, we were responsible for the demonstration the operational feasibility of these different RS-enabled EBV prototype algorithms. Therefore, we started by implementing the prototyped algorithms on our VITO Remote Sensing private cloud platform and subsequently applied the algorithms to two countries of interest: Finland and Senegal.

We did not choose Finland and Senegal randomly. Both countries were selected on the basis of some important elements that include:

Land Surface Phenology metrics over Senegal for instance clearly show the later start of season (SOS) and earlier end of season (EOS) dates in the north of Senegal, resulting in shorter growing season lengths compared to the south. This difference is driven by the climatic gradient, mainly the amount of rainfall. 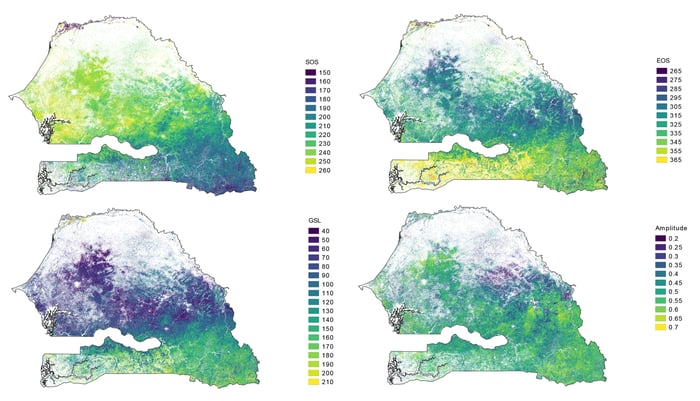 Similarly, high resolution maps of Canopy Chlorophyll Content (CCC) over Finland demonstrate the relatively equal seasonal low values across the whole country with higher maximum CCC values towards to the south(west) thanks to mild influence of the Baltic sea. 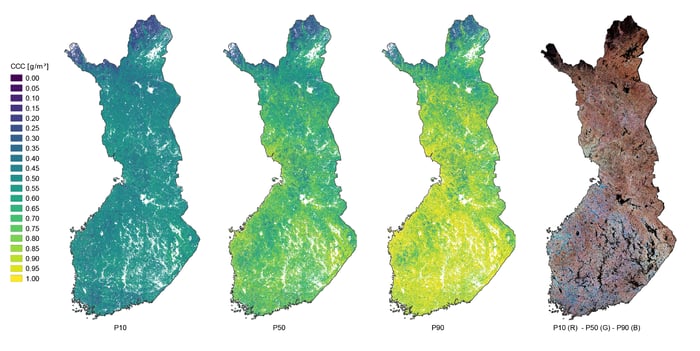 Finally, I also want to share the habitat maps created for the Arctic Fox in Finland and Chimpanzee in Senegal. These maps can be very useful to assess the remaining potential habitats for these species and compare these with their actual distribution. 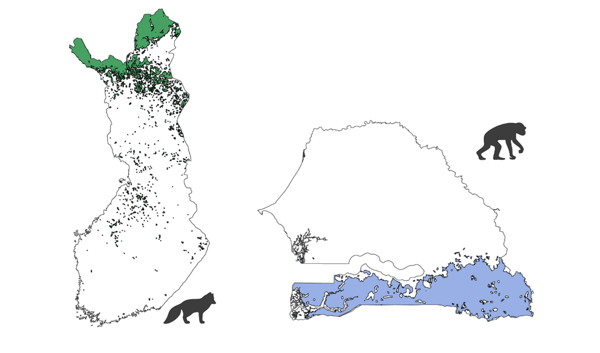 Overall, this demonstration at country scale of the prototype RS-enabled EBV algorithms was very successful. It showed that, although some more optimization and flexibility in terms of implementation is needed, technically it is feasible to calculate the prototyped RS-enabled EBVs at global scale.

GlobDiversity has advanced the coordinated effort to move towards a unified and global biodiversity monitoring system that may inform the indicators assessing progress towards various targets. With this, GlobDiversity has supported the efforts of the Convention on Biological Diversity (CBD), the IPBES and GEOBON, to build a global knowledge of the state of and changes to the biological diversity of terrestrial ecosystem and the services they provide to society. This effort will now continue in the recently started ‘EuropaBON’ project, in which our land cover team is responsible to design the data stream from remote sensing into a European system to monitor biodiversity and support policies.

GlobDiversity was an ESA-funded project funded under EOEP-4 Data User Element. More information can be found at www.globdiversity.net or click here to download GlobDiversity documents and informative materials.

A first look at historical land cover changes over the Sahel

A first look at historical land cover changes over the Sahel