Plastic, the miracle product of the 20th century?

Plastic is the miracle product of the 20th century. Now, more than a century after the discovery of the first synthetic plastic in 1907, we know better. Annually, an estimated 4.8 to 12.7 million tonnes of plastic debris ends up in the sea (Jambeck et al., 2015). This, together with the very slow degradation of plastic, has led to a gradual increase in plastic in the sea and on the beach. Plastic litter not only has a major negative impact on marine life but is also associated with global economic losses.

Fortunately, ocean science, sustainable development and marine litter are high on the political agenda today. One of the Sustainable Development Goals (SDG 14, Life Below Water) specifically addresses the use and conservation of oceans, seas and marine resources with one of the objectives being to prevent and significantly reduce marine pollution of all kinds by 2025, including marine debris.

Marine litter is found in all seas and oceans, even in the most remote areas far away from human contact. In Flanders, too, it is necessary to study and tackle the presence, inflow and impact of (marine) litter and microplastics in our Flemish waters and coastal areas. The policy brief of the Flanders Marine Institute (VLIZ) already bundles the scientific knowledge about debris in Flanders, and also maps out the research landscape and needs (Devriese and Janssen, 2019).

Studies show us that an average of 126 items of litter per km² are found on the seabed of the Belgian part of the North Sea. In the coastal zone, more than 90% of the debris on the seabed consists of plastic. Also on the beach the vast majority (80%) of the litter consists of plastic. On the Flemish beaches, an average of 137 items of litter per 100 meter tide line are noted  (Belgische Staat, 2018). But also microscopically small plastic pieces, the microplastics, are abundantly present in our waters. For example, up to 50,000 microplastics per kg of sediment were found in the sediment of the Scheldt River (Van Cauwenberghe, 2015). 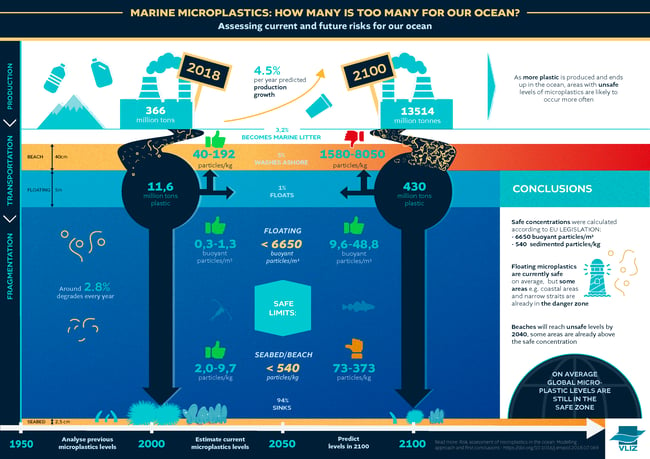 Plastic debris in the sea can, e.g. as a result of suffocation or entanglement, lead to the death of numerous marine animals such as whales, seabirds and seals. Microplastics are ingested by a very wide range of organisms and can even end up on our plates via (sea)food. Currently there are no safety levels for microplastics in food, nor enough scientific data available to estimate the risks to public health.

Turn the tide on plastics!

As part of the new European Plastic Strategy, the European Commission recently proposed new rules that should greatly reduce the use of disposable plastic. The Public Waste Agency of Flanders (OVAM) has also made a Flemish action plan with measures to tackle marine litter (OVAM, 2017). At the federal level, the Minister for the North Sea also launched an action plan to combat marine litter, a step towards a total approach (De Backer, 2017).

FlanderPlastic debriss is strongly committed to Blue Innovation, including through the Blue Cluster, the sixth spearhead cluster in Flanders. One of the domains of the Blue Cluster covers the theme of ‘ocean pollution and waste solutions’, where the Blue Cluster focuses on the detection, monitoring and removal of debris from the marine environment.

The Policy Brief on marine litter in Flanders (Devriese en Janssen, 2019) shows us there is a great demand for user-friendly and automatic monitoring programmes in both marine environment and the Belgian rivers in order to retrieve the sources, the presence, the behaviour and the transportation routes of marine litter.

In order to clearly map the current situation, we need innovative and cost-efficient technologies, including automatic monitoring systems (e.g. multi-platform sensors) to monitor plastic pollution in aquatic environments. To this end, researchers from Flemish universities, VLIZ and VITO are currently joining forces with the industry to tackle this knowledge gap and propose innovative solutions. Earth observation data and remote sensing are perfectly used as a non-disruptive detection method for floating plastic litter, both in rivers, harbours and coastal areas.

The use of automatic monitoring systems will contribute to the current knowledge gap about the plastic accumulation areas and the plastic flux, crucial to take efficient measures against plastic litter in the future.