The reflected sunlight from objects on Earth contains a large amount of information. The signal is influenced by everything it meets on its journey from the sun to the sensor: the reflecting surface (soil, vegetation, water or human constructions) or the atmosphere it passes through. Unraveling and exploring this information is an exciting part to prepare the next steps for future Earth Observation applications.

To study many crucial processes on Earth like global and local air pollution, climate change, water management and many more, a researcher needs as much detail as possible from the reflected sunlight signal. This is where hyperspectral sensors help out, by measuring the signal strength in hundreds of very narrow spectral bands.

A remote sensing instrument needs a carrier platform. This may be an aircraft, a drone or a satellite. Selecting the right platform is key to use the instrument to is full potential.
For example: an aircraft is able to carry multiple, heavy, ultra-performant instruments and cover bigger areas than a drone. Satellites on the other hand are able to coverage almost any location on Earth with lower spatial resolution. In validation exercises both are used to support each other and to compare their results to optimize data processing.

From simulator to operational hyperspectral system

APEX, short for Airborne Prism Experiment, is a high spectral and spatial resolution hyperspectral sensor developed by a Swiss-Belgian consortium on behalf of ESA. It has been  operational since 2010 with the support of the Belgian Science Policy Office.
APEX was originally intended as a simulator and a calibration and validation device for spaceborne hyperspectral imagers. Together with the Remote Sensing Laboratories (RSL) of Zürich we took the instrument out of the lab environment into the real world including pre-campaign instrument calibration, yearly flight campaigns and data processing. 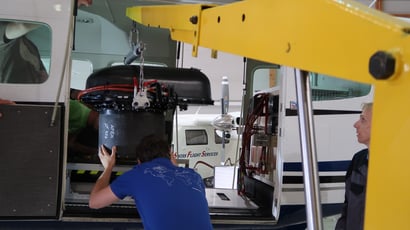 Almost 10 years after its first mission, we’ve covered about 250 areas in 15 different European countries and delivered data cubes that supported more than 100 research projects to:

BIRA-IASB, the Royal Belgian Institute for Space Aeronomy has used APEX in several projects since 2015. Frederik Tack, atmospheric remote sensing scientist at BIRA, explains why APEX is interesting for them: “Hyperspectral data obtained from APEX allows us to retrieve and map the concentration of pollutants like NO2 at high resolution and accuracy. This offers a wide range of research opportunities like the study of the horizontal variability of pollutants in urban areas, top-down emission estimation and satellite validation.”

"APEX allows us to retrieve and map the concentration of pollutants like NO2 at high resolution and accuracy."

The map below shows APEX NO2 column concentration observed close to Antwerp, Belgium on June 27, 2019. Clear patterns of increased NO2 concentration that are transported downwind from emission sources in the harbour and the city can be observed. Some detailed confined plumes from individual stacks are visible as well, next to increased values along the ring road and junctions with the key highways. Satellite observations from TROPOMI on Sentinel-5P are overlayed as color-coded polygons and are largely consistent with APEX retrievals. 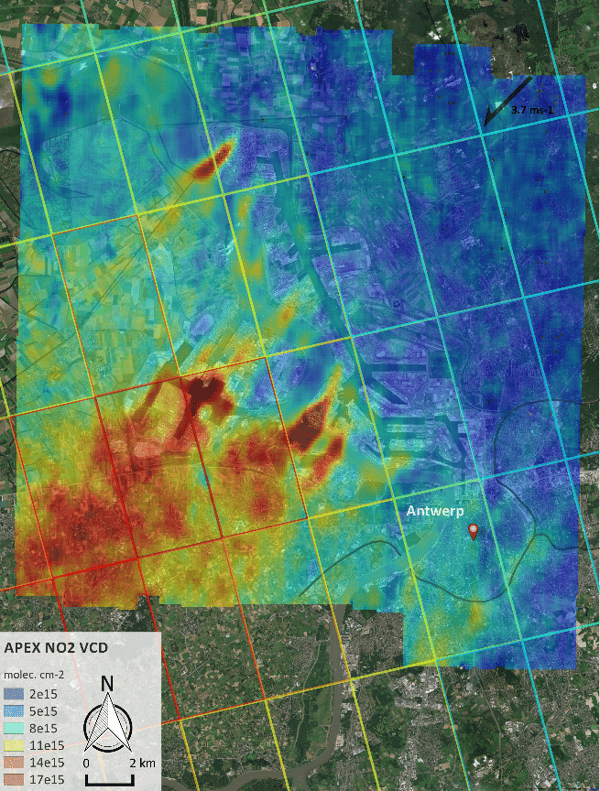 In 2018 APEX was deployed in a large airborne campaign. Andreas Hueni from RSL coordinated the multiple sensors missions for ESA to:

A key aspect was also the operation of APEX in tandem with the AVIRIS-ng sensor owned by NASA and operated by JPL.

"One of the most exciting APEX missions was when we coordinated three different research aircraft over the same target zone as close in time as possible without violating any safety aspects."

ESA asked APEX to overfly the Harth Forest (France) back in 2013 in the context of Copernicus Sentinel-2 and FLEX mission preparations.

“Combining data from different instruments at ground, in aircrafts and from satellites enabled us to build a consistent set of reflectance data with corresponding field measurements.”

Making progress in revealing crucial information on the complex processes on Earth requires further cooperation between multiple instruments from different institutes. In this way technology and science contribute to our future.

How to integrate a multispectral camera under a low-cost drone

How to integrate a multispectral camera under a low-cost drone