Aerosols play an important role in the Earth’s energy balance. In the absence of clouds, the reflectance measured by a satellite consists of surface and atmosphere contributions (see Figure 1 for a conceptual plot of the scattering and absorption processes in the Earth’s atmosphere). Because aerosols contribute most to the atmospheric scattering and absorption in the visible and near-infrared, obtaining accurate Aerosol Optical Thickness (AOT) information, a measure for the atmosphere’s opaqueness due to aerosols, is very important in the atmospheric correction to yield accurate surface reflectance information. 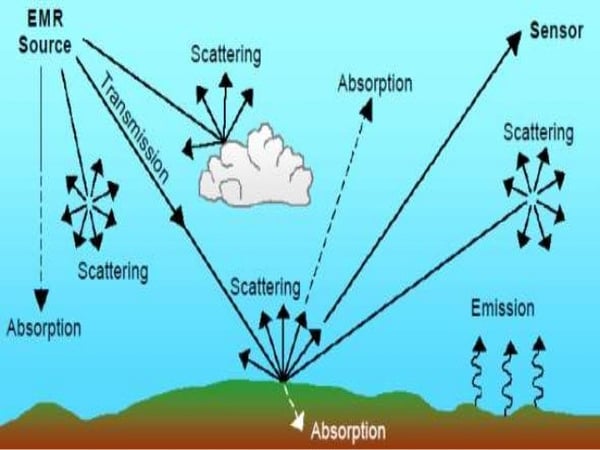 Conceptual plot of atmospheric scattering and absorption in the Earth’s atmosphere.

Until now, Aerosol Optical Thickness (AOT) information over vegetated areas is retrieved from the PROBA-V BLUE and SWIR channel reflectances (Maisongrande et al., 2001) and used as input for the Simplified Model for Atmospheric Correction (SMAC, Rahman and Dedieu, 1994) algorithm. However, comparisons with ground based AOT observations revealed a considerable mismatch.

We therefore developed an atmospheric correction model for PROBA-V data, in which we focused on the usage of more accurate AOT retrievals and the application of a more accurate atmospheric correction algorithm. We investigated the usage of the Combined Inversion of Surface and Aerosols (CISAR), a state-of-the-art method to simultaneously estimate AOT and surface reflectance. CISAR has already been used on geostationary Meteosat satellite observations and requires multiple cloud-free observations with sufficient spectral resolution to accurately characterise the surface reflectance.

The challenge with polar orbiting satellites, such as PROBA-V, is to do this with only a limited amount of daily observations and with only a few spectral channels. A well-spoken topic we were happy to research during the ESA-funded Advanced Land, Aerosol, and Coastal Products for PROBA-V (PV-LAC) project. There were two major research topics: 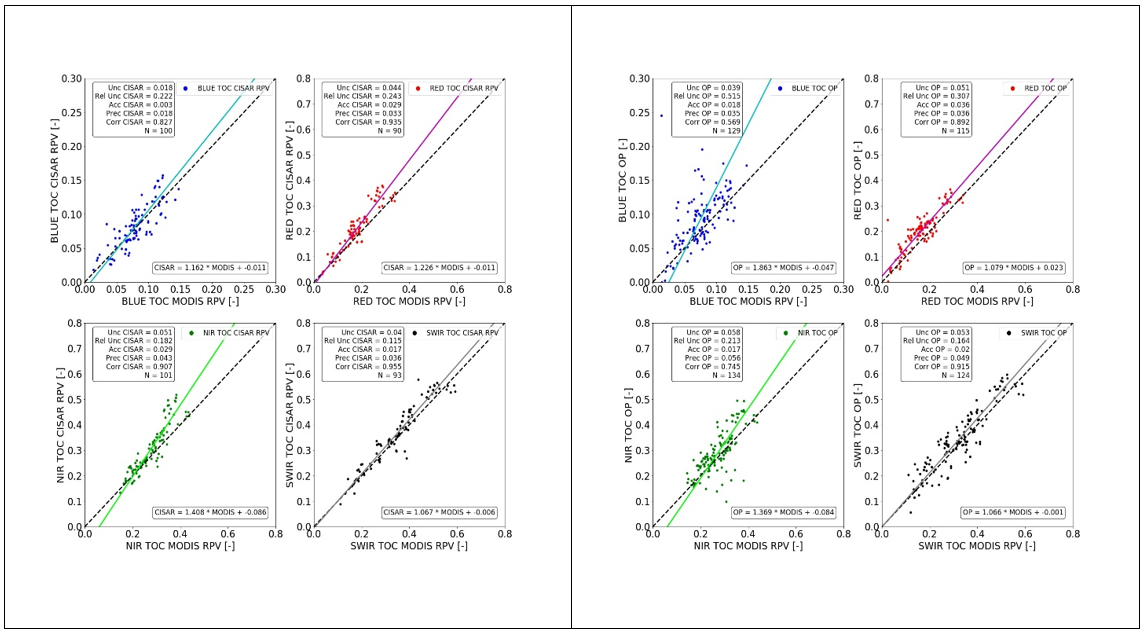 In 2016, NASA and ESA invited researchers to participate in the Atmospheric Correction Intercomparison Exercise (ACIX), a study to investigate the differences between various atmospheric correction methods. During this study we assessed the accuracy of our in-house iCOR algorithm. After application to Landsat 8 and Sentinel 2A data, the intercomparison showed that iCOR is well suited to retrieve accurate AOT and surface reflectance information. The ACIX results were recently published, the paper can be viewed here. Within the framework of the Terrascope platform, iCOR is already operationally applied for the atmospheric correction of Sentinel-2 imagery.

Additional to the potential improvements to retrieve AOT information from the image data, we investigate the usage of accurate auxiliary AOT data in case no retrieval is possible. The Copernicus Atmosphere Monitoring Service (CAMS), provides AOT data that comprise a combination of sophisticated atmospheric composition modelling and assimilation of various satellite-based AOT retrievals.

Developing multiple image processing services for various applications and end-users, we continuously put efforts to further improve and harmonise the radiometry and atmospheric correction for various sensors. These efforts aim at seamlessly adding satellite time series from the early NOAA-AVHRR satellites through the recently launched Sentinel-3 satellites, and we thereby generate a harmonised surface reflectance dataset that will finally span multiple decades.

Stay tuned for more news as we will continue our research studies in radiometric harmonisation of these long term multi-sensor datasets (Landsat-8, PROBA-V, Deimos-1, and Sentinel-2).