Monitoring global land cover changes is essential in managing the Earth's natural capital such as soils, forests, water resources and biodiversity. Given the changing state of this natural capital, the need for timely, accurate and high resolution land cover information is more pressing than ever.

As outlined in my previous blog ‘Towards a global land cover map at 10 m resolution’, the European Space Agency initiated the WorldCover project to answer to this need. With an amazing team of highly experienced remote sensing experts, EO researchers and data scientists, covering all relevant aspects of land cover mapping we kicked-off ESA WorldCover on August 27, 2019 to provide a new global baseline land cover product for 2020 in almost near-real time with the following cardinal requirements:

Together with our project partners, Brockmann Consult, CS SI, Gamma Remote Sensing AG, International Institute for Applied Systems Analysis and Wageningen University, we are now pleased to share with you this brand new WorldCover map available free of charge to the entire community. 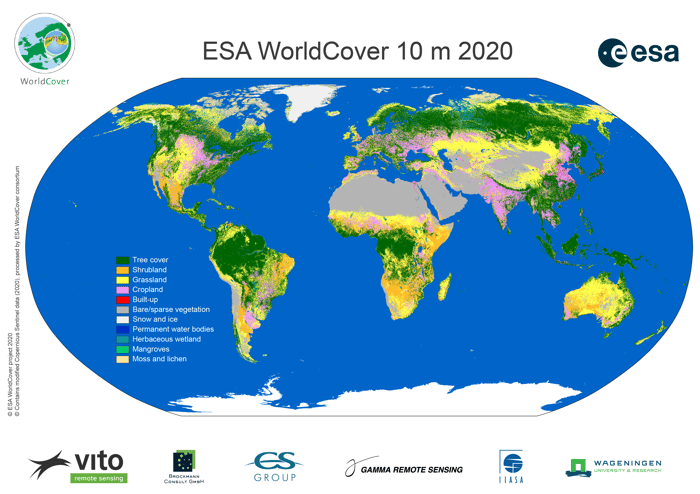 The WorldCover map contains 11 different land cover classes at 10 m resolution. From cropland or grassland to permanent water bodies over built up areas and much more. The WorldCover map is valuable for a diverse set of users active in e.g. agriculture, biodiversity & nature conservation, land use planning, natural capital accounting, as well as climate change. Compared to the prototype presented last year, we even added an additional mangrove class at the request of several end users who wanted to see mangroves added because of the importance of this class as a carbon sink. 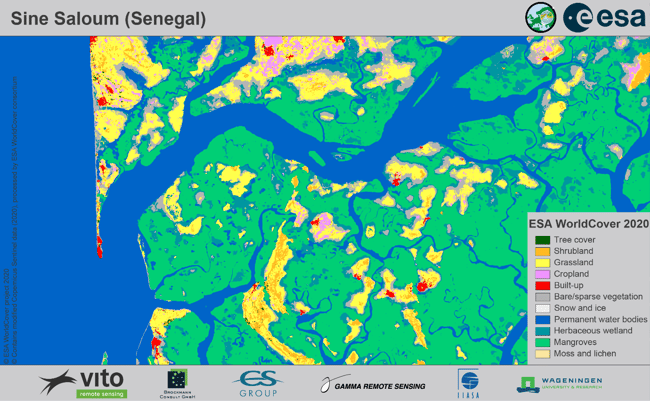 One of the key benefits of the WorldCover map is its unprecedented detail. By using both Sentinel-1 and Sentinel-2 satellite data we could not only enhance spatial resolution but it allows us also to provide land cover information in areas with persistent cloudcover and update the land cover map almost in real time. Providing much more spatial detail is crucial to ensure the map will meet our users’ requirements even better.
When zooming in on an urban area for example, we can clearly see the effect of the improved spatial resolution from 100 m to 10 m. Major roads and urban green areas are now also recognizable while before they were either discarded or lumped into the built-up class.

A detailed zoom on San Francisco: on the left WorldCover (10 m), on the right Copernicus Global Land 1(00 m) clearly showing the difference in spatial resolution.

Processing Petabytes of data in less than 5 days

As you can imagine, one of the main challenges of the ESA WorldCover project was the amount of data to process. Thanks to the very efficient processing pipeline and scalable infrastructure, we were able to process the whole world in less than 5 days.

Let me give you some more technical details on the product generation and characteristics:

One of the key requirements of the ESA WorldCover project was to have it independently validated following the requirements of the Committee on Earth Observation Satellites (CEOS) Working Group on Calibration and Validation (WGCV) Land Product Validation (LPV). This validation, carried out by Wageningen University, showed that the overall accuracy of the WorldCover product with 11 classes is 74.4% on a global scale, with accuracy levels by continent ranging from 68 to 81%. More details on this validation can be found in the product validation report available on the WorldCover website.

One of the major assets of the WorldCover map is that it’s accessible open and free for anyone interested in monitoring global land cover changes. To provide a user-friendly access the WorldCover map is released in a brand new online viewer.
The WorldCover viewer displays the WorldCover map globally and also allows for comparison of area statistics between countries and regions. Moreover, it offers the possibility to give feedback on the product and to download it in standard geographic projection (EPSG:4326).

Next to our dedicated WorldCover viewer, the new global land cover map is also published as part of the Google Earth Engine (GEE) Data Catalog. Users familiar with the GEE platform can use this to perform customized analyses and visualizations. We also developed an Earth Engine app based on this asset.

The WorldCover consortium consists of a group of highly experienced European service providers and research organizations, covering all relevant aspects of land cover mapping. VITO (Belgium) is the prime contractor of the WorldCover consortium together with Brockmann Consult (Germany), CS SI (France), Gamma Remote Sensing AG (Switzerland), International Institute for Applied Systems Analysis (Austria) and Wageningen University (The Netherlands). They have a long track record of collaboration in diverse European and ESA projects, as well as the Copernicus Land and Climate Change Services.