With an ever-changing environment the need for accurate, timely and high-resolution information on land use/land cover and its changes has increased tremendously over the past years. For this purpose, the European Space Agency (ESA) initiated the WorldCover project. In less than 2 years the WorldCover team is challenged to establish a first global land cover map at 10 m resolution based on both Sentinel-1 and Sentinel-2 data. Together with our partners Brockmann Consult, CS SI, Gamma Remote Sensing AG, International Institute for Applied Systems Analysis and Wageningen University, we are developing and validating a new global baseline land cover product for 2020 in almost near-real time while at the same time maximizing the impact and uptake for the end users. During the project we focus on the following core objectives:

A crucial aspect in the project is the involvement of several end users who provide primary input for all engineering aspects. This allows us to obtain a maximum impact in terms of added value to the involved end-user organizations. Our five key end users, CIFOR, FAO, OECD, UNCCD and WRI, are an integral part of the project and are following the project from the very beginning up to validation and uptake. Furthermore, these key users are complemented with several associate users such as SwissRe, CSIRO, IFPRI, Ferrero Trading Lux S.A., Avia-GIS, GEO BON and GEOGLAM who also help to steer the project. Consequently, WorldCover aims to provide a substantial benefit to various user communities, expands this community and facilitates the development of novel services.

Synergetic use of Sentinel-1 and Sentinel-2

Besides a strong focus on our end users, WorldCover represents also a tremendous step forward towards the joint use of Sentinel-1 and Sentinel-2 data for worldwide land cover mapping. The Sentinel-2 satellites pass the same location above the earth’s surface at least every five days. The Sentinel-1 satellites on the other hand can help if areas remain cloudy for a long time, while they also provide complementary information on the structural characteristics of the observed land cover. The combination of these data allows us to update the land cover map almost in real time. By improving the resolution to 10 meters on the other hand, many more details become visible, which ensures that the map will meet the requirements of its many users even better.

Sentinel-1 and Sentinel-2 cutout  of The Netherlands (S1, above) and Belgium (S2, below)

Release of the WorldCover prototype map

In September 2020 the team successfully finished phase 1 of the ESA WorldCover project and demonstrated the prototype land cover maps over 27 macro-regions covering 10% the world during an open webinar. During this webinar we presented the WorldCover project, showed the first prototype maps and explained more about the methods on the collection of training data and validation. The exact locations of the 27 macro-regions were selected based on a combination of: 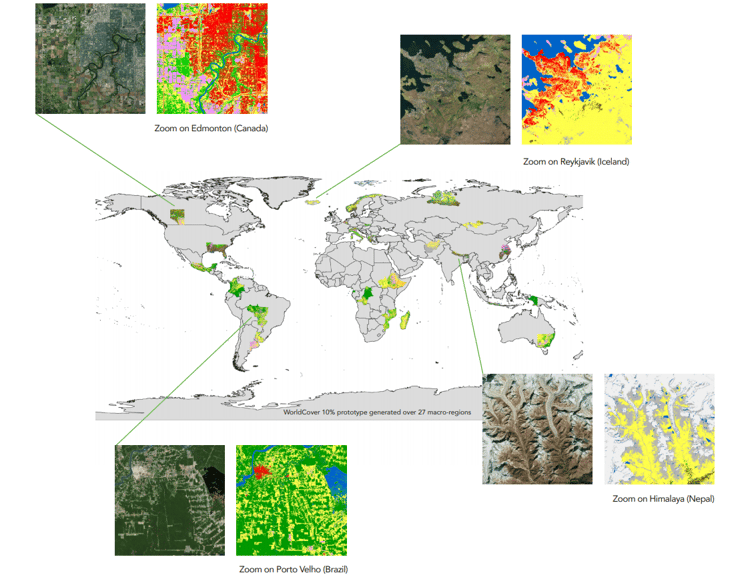 This webinar gave us the opportunity to interact with the participants and discuss the proposed technical specifications of the product, answer specific questions and share feedback, all important to finetune our methodology in view of the final release. Did you miss this webinar, or do you want to view it again? You can find the webinar recording on our WorldCover project website, https://esa-worldcover.org

The resulting prototype maps, as shown in the images above and below, clearly show the effect of the enhanced spatial resolution of Sentinel-1 and Sentinel-2, providing much more details. Big improvements can be found in e.g. urban areas where now roads and urban green space are also classified at an unprecedented resolution.

Countdown to the release of the global map

The WorldCover project is split into 2 phases. The first phase, which covered a time span of 12 months from (August 2019 – August 2020), focused on the production of the 10% prototype maps. Now, we’re in the middle of phase 2 and fully focusing on the finetuning of the classification algorithms and the development of the production system.
In a few weeks, we will start the production of the global land cover map, followed by an independent validation of the product. Once this is all done, the WorldCover global land cover map at 10 m resolution will be available free of charge to the entire community. So, stay tuned for more!

The WorldCover consortium consists of a group of highly experienced European service providers and research organizations, covering all relevant aspects of land cover mapping. VITO (Belgium) is the prime contractor of the WorldCover consortium together with Brockmann Consult (Germany), CS SI (France), Gamma Remote Sensing AG (Switzerland), International Institute for Applied Systems Analysis (Austria) and Wageningen University (The Netherlands). They have a long track record of collaboration in diverse European and ESA projects, as well as the Copernicus Land and Climate Change Services.