With an ever-changing environment, governments, businesses and individuals need high-resolution, accurate and timely land-cover information. For this purpose, ESA initiated the WorldCover project which was kicked off in 2019. Two years later, in October 2021 the WorldCover team proudly released the new global baseline land cover product at 10 m resolution for 2020.

Following the positive feedback from the users, ESA decided to extend the WorldCover project and requested the WorldCover consortium to also produce a 2021 version of the product with an even higher quality.

Together with our project partners, Brockmann Consult, Gamma Remote Sensing AG, International Institute for Applied Systems Analysis and Wageningen University, we are now pleased to release this new and improved WorldCover map for 2021, again available free of charge to the entire community. 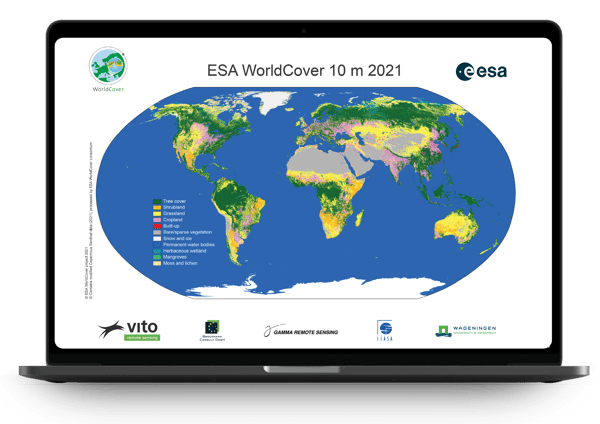 To build the WorldCover 2021 map, we of course didn’t start from scratch. The WorldCover 2021 map mainly uses the same algorithm that we used to develop the WorldCover 2020 map but, nevertheless, addresses the identified limitations of the 2020 product. By finetuning the input training data, features and expert rules used to generate the 2021 product, we were able to improve the map quality and ensure the same unprecedented level of detail of the WorldCover 2020 map which was highly appreciated by many of our users. As a result, the WorldCover 2020 and 2021 maps show changes that can be identified to both real land cover changes or to changes due to the algorithm improvements (V200 vs V100). A direct comparison of the maps is therefore discouraged, but users should rather use the 2021 map if they want an improved, up-to-date and more accurate representation of the actual land cover. 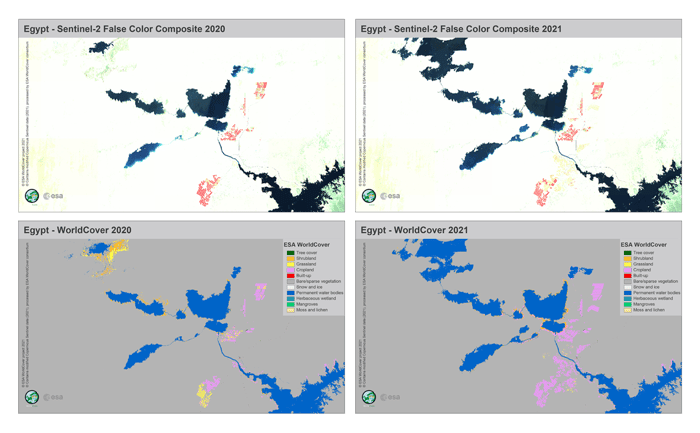 Zoom on the Toshka Lakes in Egypt showing the different water levels and cropland expansion between 2020 and 2021 visible both in the annual Sentinel-2 False Colour Composites and derived WorldCover maps.

An ever higher quality

As with WorldCover 2020, the independent validation was carried out by Wageningen University (see also the product validation report). The results show that the overall accuracy of this new WorldCover 2021 product with 11 classes increased to 76.7% on a global scale, with improved accuracy levels by continent ranging from 73 to 82%. Compared to 2020 the following classes show significant improved results:

The WorldCover 2021 therefore meets the needs of our users even more!

Zoom on northern Uganda showing the differences between the WorldCover 2020 and 2021 maps due to the different algorithms used. The 2021 map addresses commission in tree cover, cropland and herbaceous wetland in the 2020 map.

During the processing of the WorldCover maps, we processed approximately two Petabytes of Sentinel-1 and Sentinel-2 data in among others a set of annual 10 m Sentinel-2 RGB/NIR and Sentinel-1 VV - VH - VH/VV median composites. Solely, these composites constitute already a great data source, but together with the WorldCover products, they create a unique temporally and spatially consistent dataset to train e.g. machine learning algorithms and serve various applications. We are therefore happy to announce that, next to the new WorldCover 2021 map, soon we will also provide the 2020 and 2021 Sentinel-1 and Sentinel-2 composites. These global composites will be freely available to all users, not only for viewing (currently already possible in the viewer), but also for download! Stay tuned.

With on average more than 3,000 monthly visitors, many users have found their way to the WorldCover viewer where they can display the WorldCover map and Sentinel-1/2 composites, retrieve area statistics of countries and regions, download the products in standard geographic projection and even give feedback. For the WorldCover 2021 release, we not only added the new and improved 2021 map, but also added a new feature which allows users to compare the WorldCover map with the different Sentinel-1 and Sentinel-2 global composites and different map versions to highlight the improvements of the 2021 map.

Finally, next to the dedicated WorldCover viewer, we also updated the other distribution channels so that users can now also download the products from either AWS, Zenodo or develop customize analyses and visualizations using Google Earth Engine.

The WorldCover 2021 map and Sentinel-1/2 composites were released on October 28, 2022 during a webinar. More information about the WorldCover map including the instructions to download and use the WorldCover product, the validation report, etc., can also be found on the WorldCover website.