Since July 2018, international dredging company Jan De Nul Group is active in Texel, The Netherlands working on the construction of the 'Prins Hendrikzanddijk' over a distance of 3 km. The project has two main goals: it will create a future-proof water barrier in the form of dunes and it will improve the ecological value of the Wadden Sea. The sand is dredged in the North Sea and transported to the project site by the Trailing Suction Hopper Dredger Bartolomeu Dias.

During such dredging activities the company has to ensure that the sediment concentrations in the water layer don’t exceed certain maximum values. Especially when working in the vicinity of valuable and vulnerable ecological areas. Today dredging companies mainly rely on point measurements and buoys to monitor the water quality. But can drones assist them in visualizing and measuring sediment concentrations in particular?

A DEMONSTRATION IN TEXEL

Dredging activities result in elevated suspended particulate matter concentration in the water, which can be quantified using aerial remote sensing. We demonstrated this technique in pilot case in Texel, using a drone, operated by Euro Drone Inspections.It is a challenging endeavor to collect useful and accurate data knowing that:

“We are currently still doing everything via manual measurements, having to sail from buoy to buoy.
Drones can give us a detailed spatial overview of the sediment plume in one movement. This signifies a big step forward in our day-to-day operations.”

The data acquisition needs to be done exactly right. Working with a professional drone pilot, several flights were performed using a multi-spectral camera and a drone platform with accurate orientation information. During flights the location and the footprint of the camera were closely monitored. The images captured by the camera are shown in real time on the operator’s screen and marine traffic is also tracked and displayed on the same map using  Automatic Identification System (AIS) information. As such, flight missions can be easily adapted during the flight.

The benefits of drone technology

The use of a drone, or drone data actually, creates extra possibilities next to standard survey techniques: 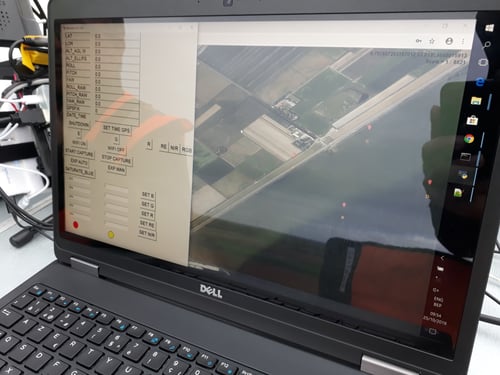 Using drones has clear benefits, but the focus is of course on collecting the right information, in this case water quality, out of the data. The captured drone data can be inserted in a semi-automated post-processing workflow to create tailored end-user maps. This workflow allows you to convert the raw digital numbers captured by the camera into products including:

The workflow is specifically made for water applications where direct georeferencing and sky glint corrections are crucial for quantitative studies.
Sky glint is corrected for using the atmospheric correction tool iCOR, adapted for drone systems. During the demo in Texel, two small boats were collecting in situ data (continuous turbidity meter & water samples) for validation of the results.

From true color drone data to turbidity data or mosaic.

Triggered by new in-situ monitoring tools, including drones, citizen science or many more? Check  the MONOCLE website for more information. This project has received funding from the European Union’s Horizon 2020 research and innovation programme under grant agreement No 776480.

Object detection for plant phenotyping with Phase One and MAPEO

Object detection for plant phenotyping with Phase One and MAPEO